We continue to summarize 2022 on Twitch. In this article, we’ll tell you which streamers have become the most watched on this streaming platform.

Because every year Twitch streamers become more popular, and their channels gain millions of views. These numbers are constantly growing, so it is interesting to know which channels have attracted the largest audience.

Many websites do this kind of research at the end of each year. We’re basing our ranking on the Streams Charts.

Now, check out our article for the most-watched Twitch streamers. The top 10 channel rankings below are based on the total hours watched by Twitch users during 2022 (January to December). 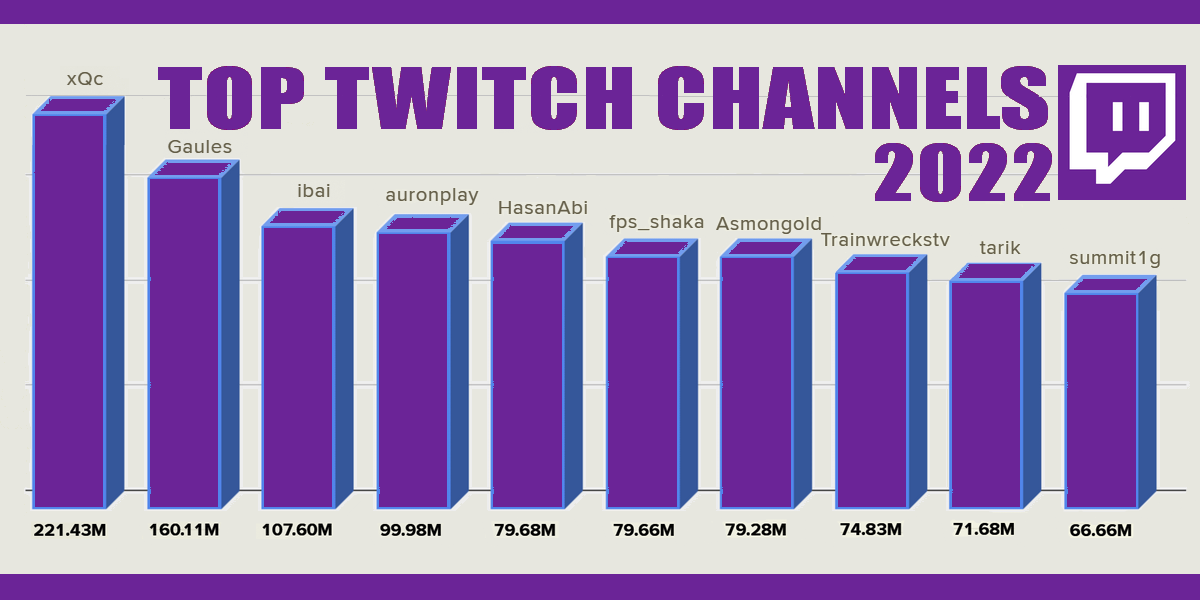 Canadian Twitch streamer Felix Lengyel (better known as xQc or xQcOW), had already been recognized twice as the most-watched streamer on Twitch in 2020 and 2021. This year, he spent more than 3.2K hours on the air (and attracted more than 221M hours watched)! His peak viewers record was in during Overwatch 2 broadcast.

Alexandre “gAuLeS” Borba Chiqueta is a Brazilian Twitch streamer, eSports player, and caster. A legend of the CS:GO community in his country,  now dedicates his channel to streaming and commentating Counter-Strike tournaments. He continues to hold second place for the third consecutive year. In 2022, his channel generated more than 160M hours watched.

ibai (or Ibai Llanos Garatea) is a Spanish streamer, esports caster, and co-owner of the esports team KOI. He was a content creator for G2 Esports. In 2022, Ibai rose from fourth to third in the ranking. Spanish Twitch streamer gained more than 107M hours watched.

Next in our top five most-watched streamers is followed by another Spanish Twitch streamer & YouTuber Raul “AuronPlay” Alvarez Genes and a Japanese streamer Chikara Kawakami “fps_shaka”.

So, let’s take a look at our entire top ten…

Most watched channels on Twitch in 2022:

P.S. Now, there you have it, the 10 top Twitch channels on the platform in 2022. We will update these rankings every year as streamers gain more hours watched and move in the chart…

Looking for more information about streaming? Check out other blog articles!