We have already had several users asking whether these changes from Twitch will affect the operation of our service. Let's deal with it in order.

The thing is that now on the streams, embedded on various websites, in the first 30 seconds after launch a purple pop-up button with the text "Continue watching on Twitch" is displayed.

They did not affect the work of our service in general.

The only peculiarity is that until the pop-up button appears, the window will not display the stream title, category, and other information in the player. Only the pause/playback, volume change, stream window, player settings, and create clip button will be displayed.

After closing the popup window, the full functionality of the frame will appear.

Twitch's experiment with unmissable pop-ups should get viewers to watch streams not on third-party services, but only on Twitch.

This December, if you watched broadcasts of Twitch on third-party services, beginning to see a purple screen with a notification called Purple Screen of Death (PSoD).

As for the purple screen of death (PSoD), Twitch finalized the algorithms of its appearance. If before the purple screen popped up only on third-party websites, now it appears when viewing from the official eSports page of League of Legends - the center with statistics, from which users often follow the matches. And it was also noticed in the streams and in the game client PUBG. 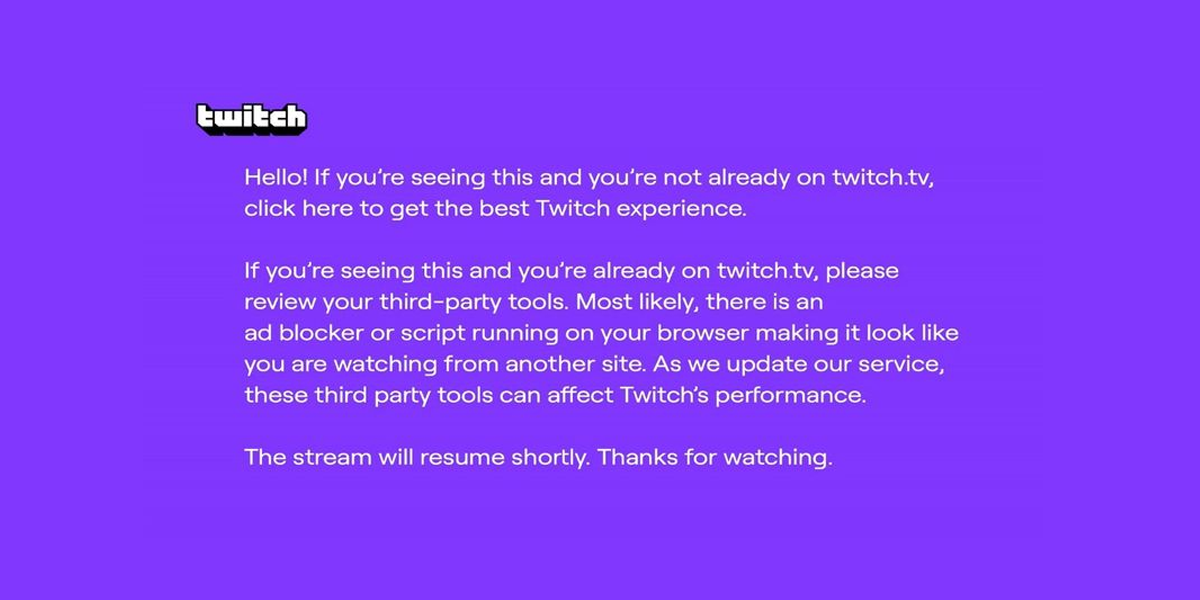 Ben Goldhaber, Twitch founding team member, has already stated: “Twitch has recently made changes to their embed player that hurts streamers, viewers, and communities”. He thinks that these changes to the platform completely ruin the experience and make embedding a less effective way of interacting with the audience. Goldhaber asks Twitch to abandon recent innovation.

Representatives of the streaming service said that this feature was introduced for the sake of experimentation.

Initially, the purple screen appeared only on the streams of users who use ad blockers (AdBlock and similar), and it did not affect the work of our service, because we initially show ads of the stream only to users who do not have AdBlock enabled at the time of viewing on a third-party website.

If Twitch did change the algorithms for the purple screen, we do not yet have one hundred percent information about whether it will appear on third-party websites when watching streams.

Some gamers blame Twitch for this, but the service is defending itself from scamming. Today, esports studios and streamers are hard to cheat with fake viewers, and they did not receive additional ads income.

These changes maybe don't influence most Twitch viewers, and many popular streamers do even not detect the difference. But, users who are unauthorized (about 30% Twitch viewers in prime) time. This is almost one million people. And how many will be ready to log in on Twitch?

But we think that maybe all the same, someday this innovation may benefit streamers and Twitch. Viewers will have to spend a lot of time on broadcasts and channels, so they will become more actively interacting with different extensions and see ads more often.